Actually I was thinking, "This is easy. This is...FUN!"

I had promised myself that my barefoot running drills would take place outdoors as soon spring hit, and now it has. It's not as warm as I had hoped. How I decided to run literally barefoot, not just in minimalist wear, is another story. This story is Sunday's run: 1.5 mile tempo run, injury-free, mostly on a sidewalk with a bit of chip-seal pavement a patch of grass thrown in at the turn. The way the day played out just made my run impossible to accomplish during daylight. I had mapped out my route in the neighorhood and set up my app to clock it, then begged hubster to keep me company because while I may be crazy enough to run barefoot at night in the cold, I'm not that crazy that I'd go it alone. As he was hardly interested in taking a freezing jaunt, I told him he could compromise and keep me company by slowly coasting down the street in the car. (Hey, it was a hybrid car running on all electric! It wasn't too unhealthy, really!) Well, anyone might've thought he was a creep as he crawled along with the windows down, calling out, "Dang you look hot!" and other such encouragement as he could think of. I began to wonder if we'd turned the tables and I'd have to protect him from a zealous good citizen... It was all over in 14 minutes. I wanted to keep running but being as cold as it was, I was afraid to overdo it and not feel any foot strain/pain. I'm happy to report that I felt absolutely nothing in my feet the next day, just the happy feeling in my heart.

Posted by Unknown at 7:56 PM No comments:

The morning caffeine ritual is one I just never fell into -- that is, until REBBL.

REBBL is not coffee. It's a tonic 'tea,' a blend of long-steeped, cold-brewed herbs bottled in glass. Following Not For Sale on Facebook, and the launch of the product through Causes.com, where Not For Sale had video updates on the creation and ideology of the beverage (click to watch!) In short, it's a beverage intended to be beneficial for the environment, those in the growing/harvesting regions, and for the consumer.

When I ordered the first shipment of Hibiscus Mint, I fell in love on first sip. So did my husband. So did my kids -- which is hard, because there is natural caffeine from the Guayusa leaf. A little caffeine goes a long way, so we all enjoy this early in the day. 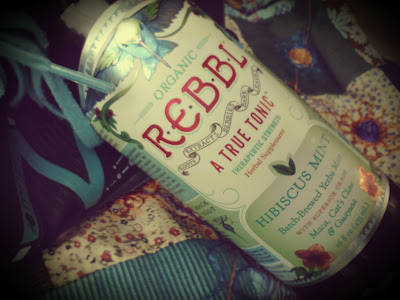 I also learned -- through REBBL's label -- of Runa's fair-trade Guayusa leaf for brewing hot. It's so scrumptious!

Not For Sale has just launched two new varieties  one featuring green tea and the other with black tea. This month I have the Forest Berry Black Tea, which is not bitter at all. It has a strong berry-mint flavor from its primary herbs. It also contains extracts of reishi, eleuthero, and elder, which are different from the herbs contained in Hibiscus Mint Guayusa. It's safe to say I love this one just as well as the first. I find that each day I am hungry for one or the other, and it seems to depend on how I'm feeling. I've found these to be great before a run or workout as they contain bot caffeine and some simple sugar. The organic sugar is cut with stevia leaf, which I find I don't taste in this. Usually I can't stand stevia extracts in beverages. These drinks are an exception because I don't detect it at all -- maybe because it's brewed with the leaf, instead of a powdered or patented extract? 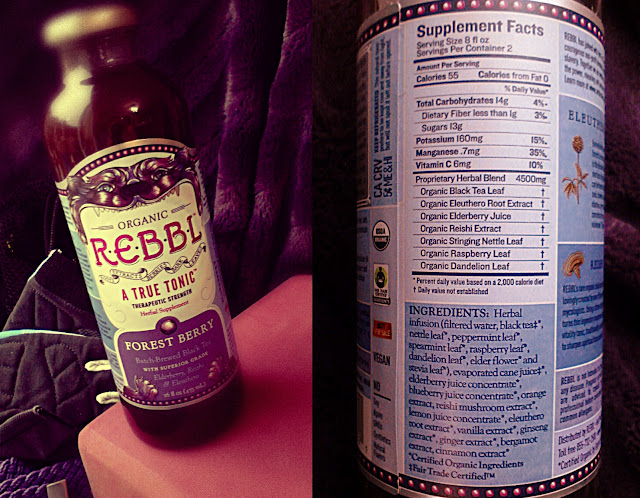 REBBL is sold through www.rebbltonic.com
For the new varities, you have to call Amanda Buthe at the number listed on the site. Amanda is so sweet and helpful, though. Some retailers in California are carrying the beverage. I can't wait until it's sold local to me so I don't have to wait for my monthly order.

It is expensive. But it's worth it, for so many reasons. I hope you get REBBLious like me and give it a try!
Posted by Unknown at 2:41 PM No comments:

Hooked by the Hoop

Hoop dancing is my preferred form of "cardio." But it is seems too much fun to be called exercise, I think. I was first introduced to hoop dancing as an adult through a mommies group, in a workshop of safe exercise for expectant, postpartum and new mothers.


I didn't know it was an art form for adults, both men and women. I always thought the hoop was for kids, and as a child I wasn't very good at it -- at all. So when I did the research and saw what it could be, I was in. Or at least, I wanted to be. It took me over a year from my first attempt to actually ordering my hoop and practicing every day. Now I am officially a fan and every day I enjoy it more than the day before. Firstborn is five years old and taught himself to waist hoop in a day. (I'm jealous!) He takes his own hoop and eagerly performs for any friends and family available, impatiently waiting for his "turn" when I'm practicing. Could it get any better? Yes, it does!

In addition to DVDs, I use YouTube for inspiration. Just yesterday I stumbled upon an article about hooping combined with yoga. Oh, my, if that isn't a glorious idea, I don't know what is! Somehow I never thought to combine those two pursuits, because hooping can be such a raucous, hilariously fun activity, and yoga speaks to me of stillness. Combing those two loves will be so much fun, and I have a new goal to pursue. Whoever thinks "fitness" and cardio is boring needs to try hoop dancing and let the wild child loose. . .


[Transformation: I love this woman's video!!]